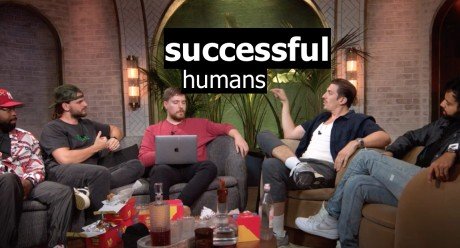 Well, Mr Beast with Joe Rogan was perhaps his best and original interview, but here at Flagrant with Andrew Schultz, Youtube legend Mr Beast answers lots of questions and we get to know him closer.

MrBeats confesses walking away from a billion dollar offer. And guess what… Mr Beast is considering running for President in his 40s.

Mr Beast gets Flagrant with Andrew Schultz and company.

Mr Beast calls the news fake. Andrew Schultz does not believe in philantropy. I donate, I believe in philantropy. Can I believe it and also not do it? Jimmy donates millions of dollars every year, he plants trees, he helps people, he has food pantries… And you also have a big lump of money that you could use to help other people. And why don’t you?How many White Oprahs do you need?

Your Netflix special that you sold on your own, that you made more than they would’ve paid you. Have you ever said How much money it was, publicly? No I haven’t. How much did you sht on Netflix. I didn’t say it was Netflix, everybody thought it was Netflix, I never said it was.

The boys order Mr Beast’s burgers live on the podcast.

First sponsor is Surf Shark VPN, Use code schulz for 83% off a 2 year plan

We probably spent five to ten thousand dollars per thumbnail. Just to make sure we get the right image and it’s good. The thumbnail makes the difference between 50 millioin views or 200 million.

How many thumbnails per video?
Around three.

Do you ever look back at old content and go like.. uh, I feel embarrased about Hot I got.. Like the one you mention Logan Paul:.

I started making no money, literally making $1 dllr a day and now I’m, the biggest Youtuber.

Invest all your money, give out all your social life and go for it.

How many videos have you taken down?
Not many, if any.

What’s the craziest, coolest video that you did, you thought it was going to be good and before you put it out you were… no, scrap that.

We did this one video where we like saw 20,000 magnets we catch a cannonball and it bombed, no one cared.

So I did have this one video – on magnets- that went really well.

I bought every magnet in my State and covered a wall. We grabbed a gun and shot a metal bullet in front of them. Can 20,0000 if they are all pulling at it, can it catch the bullet?

I think in 5 years there will be many Youtubers that will level up.

Anything that’s commoditized, eventually influencers will sell it.

Where is Mr Beats’ next venture?

Money is just to me a means to grow your company and help people and things like t hat, I don’t really care about owning a mansion, a yacht. – says Mr Beast.

Mr Beast shows the guys at Flagrant his first video made at 11 years old.

Anybody who is a little bit outside of the box. I think that obsessing over things we should allow.. It’s like your soul’s way of guiding you. You need a person to breakthrough.