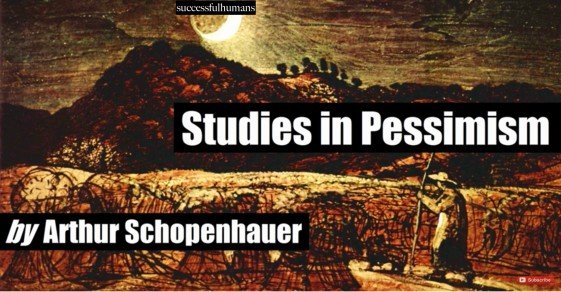 Listen to the full audiobook of Studies in pessimism, by Arthur Schopenhauer.

Full Audiobook. This recorded is in the public domain.

STUDIES IN PESSIMISM by Arthur Schopenhauer – FULL AudioBook | GreatestAudioBooks.com – Arthur Schopenhauer (22 February 1788 – 21 September 1860) was a German philosopher best known for his book, The World as Will and Representation (German: Die Welt als Wille und Vorstellung), in which he claimed that our world is driven by a continually dissatisfied will, continually seeking satisfaction. Independently arriving at many of the same conclusions of Eastern philosophy, he maintained that the “truth was recognized by the sages of India”; consequently, his solutions to suffering were similar to those of Vedantic and Buddhist thinkers (e.g., asceticism). The influence of “transcendental ideality” led him to choose atheism. At age 25, he published his doctoral dissertation, On the Fourfold Root of the Principle of Sufficient Reason, which examined the four distinct aspects of experience in the phenomenal world; consequently, he has been influential in the history of phenomenology. He has influenced many thinkers, including Friedrich Nietzsche, Richard Wagner, Ludwig Wittgenstein, Erwin Schrödinger, Albert Einstein, Sigmund Freud, Otto Rank, Carl Jung, Joseph Campbell, Leo Tolstoy, Thomas Mann, and Jorge Luis Borges, among others. (Summary adapted from Wikipedia .org) – Attribution:

Translated by T Bailey Saunders. This is a liebrivox recording.

Chapter 1: On the sufferings of the world

Each separate misfortune as it counts it seems no doubt to be something exceptional.

I know of no greater absurdity most systems of philosophy in declaring evil is just negative. Evil is just what is positive.

Pain very much more painful. The pleasure in its world outweights the pain.

The best consolation would be the thought of other people who would be in a worst state than yourself.

Time is continuing pressing upon us, always coming after us, like a master with a whip.

But misfortune has its uses. If the lives of men were relieved of all need, hardship and adversity.

They will be so full of arrogance, they will go mad.

A certain amount of care, or pain or trouble is necessary for every man at all times.

If all wishes were fulfilled as soon as they rose, how would men occupy their time..?

Men would rather die of boredom or hang themselves. Or there would be war, massacres and murders.

In early youth, as we contemplate our coming life, we aer like children in the theater as the courtain is raised.

It is a blessing that we don’t know what is going to happen.

If you try to imagine.. you will admit that it would be much better that if.. here is there, surface will still in a crystal.

In any casa, even though things have gone tolerably well. The longer you live, you will feel in a whole.. life is a disappointment, a cheat. If two men meet again…

This feeling will so complitely predominate over any other, that it will not …. it will be silently assumed and groundwork.

He who lives to see two or three generations…

While no man is to be envied, there are countless numbers whose faith is to be deplored.

It means that the man has done its task.

I shall be told, i suppose, that my philosophy is comfortless.

Do not ask us to accomodate our doctrines to the lessons you have been taught.

Ask for any doctrine you please and you will get it.

I have to remind the reader that every sense of satisfaction is negative in its character.

The hapiness that any given life…

If this is the true standpoint, the lower animals enjoy a happier destiny than men…

The material basis of it all is bodily pleasure, or bodily pain.

This basis is very restricted. It is simply health, food, protection to wet and cold, the satisfaction of a sexual instinct or the absence of these things. Consequently, as far as real physical pleasures its concerned, the man is not much better of than a brut. Except as … but also it must be remembered to any kind of pain.

But then, compared to the brut how much stronger are the passions arouse dto him.

All to produce the same results in the end.

That thought for what is absent.

For men, exercise is a powerful influence in what it does.

Emotions which affect him more deeply

And its powers of reflection, memory and foresight, man processes a machine for storing up his pleasures and his sorrows.

Whenever it is in pain it is as if he was suffering the first time.

how much it is to be envied?

But in men reflection comes in, pleasure and pain are common for him and the brut.

At one moment the man is brought in an instant to a state of delight, and in others to despair and suicide.

In order to increase his pleasures, man has intentionally added…

Luxury in all its forms. Delicate food, the use of tobacco and opium, and above and beyond al these.. there is a separate peculiar …

Almost more than this other put together..

Ambition, in the fear of honor and shame.

Taking a 1,000 forms it becomes the goal of all of the effort he makes.

It is true that behind the sources of pleasures, man has the pleasures of the mind as well.

But there is the accompanying boredom.

Boredom is a form of suffering unknown to brutes. it is only the clever ones who show traces of it, when domesticated.

Their wealth becomes a punishment. For to escape it, they will rush to all directions.

Need and boredom are the two poles of human life.

This feeling grows now and then into the form of more passionate love.

death is something very real for him. The brut flies from death instinctively without really knowing what it is. Even if only a few brutes die of. natural death.

Us men in the other hand, make this so called “natural death” the rule.