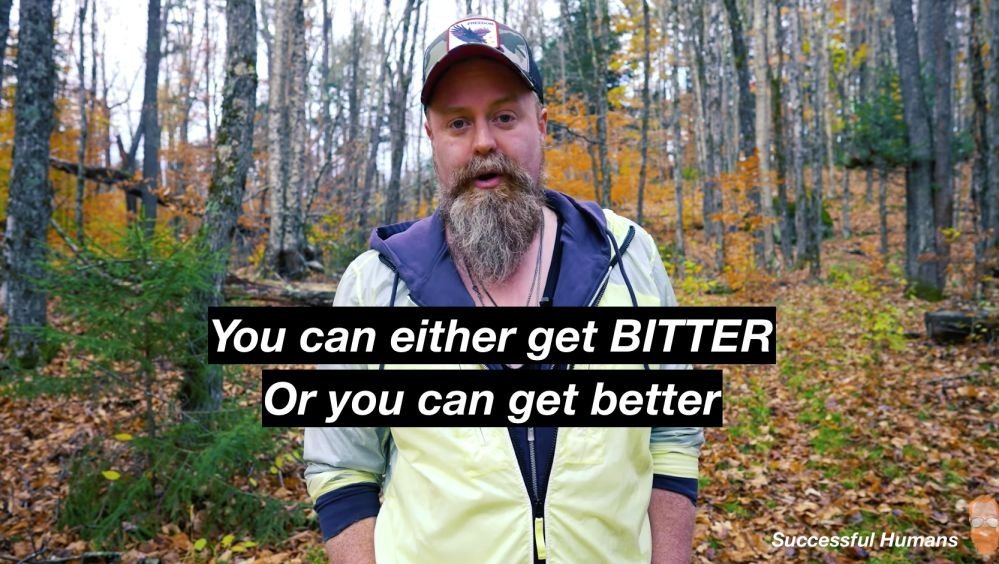 Here is another gem from Owen Cook, on his quest to help others achieve a better life.

So we are in upstate New York right now doing a mushroom hunt.

Speaking from a forest in Upstate New York, inspired on this idea: For you to grow higher, you also have to grow deeper roots.

Most people, most of us “in society” we tend to believe that we want to grow as high as we can. We wanna grow very very high, but in reality to support that structure there has to be roots, there has to be a root system.

So, take something like “being successful”. For there to really be a root system for success, i hate to say it, but there probably should’v been a series of misteps and problems.. and maybe even a little bit of pain along the way. What this pain does, and the misteps does is that it actually provides roots. It makes you grounded, and provides roots.

Let’s say you want to be successful by the time you are 40 or 50, very successful. Usually what happens along that journey, there is a failure of character. It’s seeing the world idealistically and being that person who need to ..

You are messing up your life, and you see what happens when you do that.

Being at peace with yourself and who you are.

If you look at your life RIGHT NOW, predominately, your life is a direct mirror of what’s going on in your life.

The integrity of your mind, the discernment in your mind..

realize that.. you are not really supposed to have success until you are

If you have a significant other, whatever it is i their mind, the chaos that exists in their minds.

You become who you hang out with.

Then arguments start: Why are you doing this? I’ve worked so hard for this…

Let’s say you have business and a staff..

You have a staff member, and they are working with you because they want to learn from your leadership.

It is meant to be synergistic, so that’s a good thing were you can pull them up to your paradigm.

The downside is that you assume that they have your standards, your peace of mind in your hand, your vision for what’s trying to be done, your belief system, your degree of integrity and so on and so forth.

If you assume that they have that, then why are you doing that? They haven’t been through that process.

Your job is to endure these lapses of integrity and to see the consequences of it. It is to endure the chaos in your mind and to watch how that chaos manifests in your life, and now your life is a perfect mirror of that.

Your job is to endure planting bad seeds in your mind in terms of bad thoughts and then planting bad seeds in your lfie and then later watching them pop up. The sad part is that sometimes when you are doing better, some old seed that you planted when you were in a lower paradigm pops up and you are like WHY!? why.. Well, you are on a journey and that was something that you planted back then. No different than you might’ve planted something positive years ago and you are in a different paradigm .. and that can also help you.

We are to a better extend, living the life that we built.

So, understand that this is something that you gotta put yourself through when you are frustrated in life, realize that all of that is is digging roots – but again, you can get bitter or you can get better. That’s on you to decide if you wanna get bitter or better. You gotta decide, is this going to grow the roots or are you going to get all mad and salty and there is no roots involved at all.

here are my belief systems, here are my paradigms, here are my standards, here are my values, here is where we are clearly going. Do you buy into this vision? You’ve gotta be clear that they might not have the intuitive knowledge that you have to go into that place with you. You gotta build systems that help them to basically be the beneficiareis of the lessons and the lifestyle that you built.. so they can actually be a part of it, and benefit from it. But the system itself is meant to install those values.

The systems that you build have to instill that. Otherwise what you gotta realize is that you have to draw a boundaries because you can love someone or care about them, but what happens by allowing them to operate at a lower standard you are creating a farce of an ecosystem that is fake, right? So it’s like an animal out here.. let’s say you got a wolf or a bear , it’s in perfect harmony for their ecosystem..

Say that you take someone that is just in a really really bad state of life and you put them in a better environment.. Not only is that probably not going to pan out, they are probably going to hate you by the end of it. It’s like as if you took a wolf, domesticated it for a bit ..

A) You yourself have to go through life and experience it , and allow yourself to learn lessons. Not to get bitter but to get better and allow the roots to grow. You gotta go through that.

B) You gotta then either be around other people that are at that level, that have been through that so that you can be synergistic or..

You are putting things into their mind that are not meant to be there, so you gotta be responsible in your systems.

The idea is that if you can build those systems you can bring people at a lower rate.