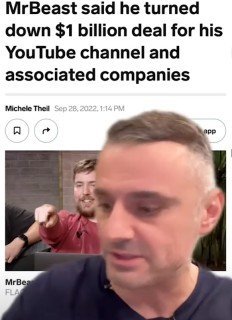 Why Mr Beast turned down a billion

Gary says he has been getting bombarded with people asking him how real that headline is: MrBeast said he turned down $1 billion deal for his yYouTube channel and associated companies

Why would that dude pass on a billion dollars?

I am laughing because in the video I think Jimmy said that it would be at least $10 million, for the YouTube channels, the chocolates and all that. I don’t think $10 billion is enough.

People are freaking out in a billion, I think 10 billion is not enough. People who are creating content and built the commodities on the back of..

Learn life and business wisdom from the top and most successful humans of today and then. Subscribe to Successful Humans on Youtube for more billion dollar talks.