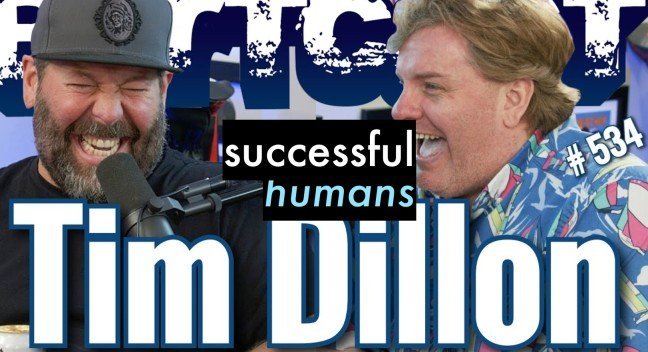 Two of the best working comedians of our times having a conversation.

Comedian and podcaster Tim Dillon with Bert Kreischer talking about different topics, the industry: LA – Hollywood vs New York and beyond.

Tim shares about his time in New York and seeing the scene in Los Angeles before moving there.

I had grown up in New York, I lived in Long Island, I lived in New York City. I didn’t get passed the Comedy Cellar, I was nervous and messed up in my first minute. I didn’t have the confidence, I was depressed.

I then had this epiphany of having to change something radical, and that was leaving everything I know and flying two thousand miles across the country because I saw what was happenning here. What you were doing.. Bert Kreishcer, Theo Von, Joe Rogan, etc.

I have this massively popular Patron, where people support our show.

Whatever you do don’t rely on advice

Have you ever broke up with a girl or a guy and it’s the worst pain you’ve ever felt, and then 6 months later you get over with it and then you miss it. Right now is what it’s going on with LA.

Do you think we are going to be looking back at this time…?

At the best time that ever happened to standup.

Now it’s the moment that builds that moment.

The era of my LA was always this office buildings or strip malls, where this people had studios that were able to make stuff and put it out. The people before me all came here to get jobs in the business.

You were the guy that moved to the gold rush and realized… I bet if I sell jeans I will make more money.

What everyone thinks it’s cool about your new special… you, out of all people didn¡t ask for the industries approval in any way. Im Tim Dillon and I do my thing.