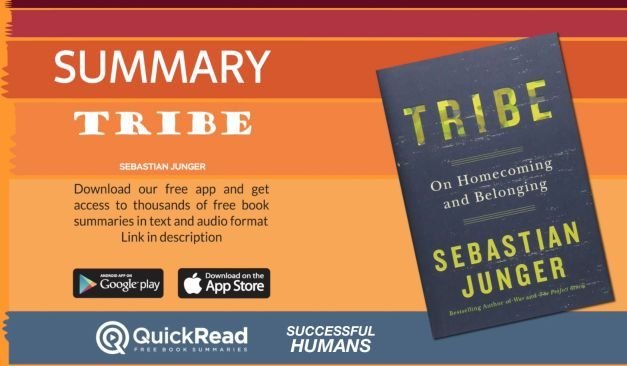 Tribe is a book on homecoming and belonging.

Listen to this summary of the audiobook TRIBE by Sebastian Junger.

The audio is just over 23 minutes long, an audio summary of the whole book.

Author Sebastian Junger remembers growing up in a Boston suburb. Neighbors hardly knew each other. American life in the suburbs is quite predictable.

Tribes give people meaning, and they make them feel needed. Modern societies have a lot to learn from tribal societies.

There was a stark contrast between two lifestyles. Most men prefer the Indian societies.

Why English men turned to tribal life? There must be in their social bond something totally captivating and far superior than the material benefits of Western civilization.

What is it about Western society that is so unappealing? As societies become more affluent, they tend to require more. More time, commitment and money. Western societies have the highest levels of mental illness in human history. Rates of depression and suicide go up rather than down.

Chapter 5 – Disasters force people to revert to a simplistic life

People were overwhelming devoting their energies towards the community, rather than themselves during natural disasters, as a sociologist found out.

Chapter 7 – War creates a sense of solidarity that is often missed.

Unfortunately, one of the biggest traumas of war, is giving it up. The sense of comradely and brotherhood, simply cannot be translated into modern society. Adversity leads people to depend on one another.

American Indians, proportionally, provide more soldiers to American war than any other demographic in the country. Native Americans understood the importance of reintegrating combatants into normal life. Modern society rarely gives veterans an opportunity to vent their feelings.

When it comes to natural disasters, wars and tragedies, many believe that society turns to chaos and mayhem as people would do anything to survive. This is often believed because of our modern individualistic society, however the opposite is true. We come together in times of suffering.

The solution is to find ways to create tribal belonging during times of peace.